I'm sure everyone has heard of the silly Will Smith slap incident.  I personally think it was done solely for publicity and I'll say why.

Will Smith is not an idiot. We need to get that fact established up front. There is no way in hell he didn't realize what all was going to take place when he walked up on the stage and slapped Chris Rock. I'm not sure what type of publicity he thought he would get out of it though.  Maybe he thought it would be the 'hero' protecting the honor of his wife.  The only problem with that though is his wife has taken away any honor he had in that area a while back.  That's his business though.   I have no idea what other reason he might have justified to himself though if it was just truly anger.

Another thing is if that had of been me (we all do things differently) and I let myself get angry enough at those silly jokes from Rock that I would actually get up and walk on the stage of some other entertainer as so to express myself in a physical manner, I certainly wouldn't just walk up and bitch-slap the guy.  I would have hit him hard enough to knock him down and then kicked him a few times just to make sure he understood just how angry I was!  Simple assault is simple assault.

I just can't see Will Smith doing that and that is the reason I believe it to be totally fake.  I think that is the reason Rock refused to press charges against him too.  This gotten tv time and publicity for both of them. A whole bunch of both actually but why?
I'm sure they had a logical reason (to them at least) why they did it.

Popular posts from this blog

August 06, 2022
I finally got my scooter to work.  I'm still trying to get enough money through a gofundme to get the normal controller for it but I don't think I'm ever going to get enough money that way.  I had to cheat again and use another kiddie scooter controller to make it work but at least it will go now. I'm still having a lot of mobility problems due to getting covid  a few weeks ago.  I wish the people in the  hospital would have told me what it was going to be like after I got well from it.  I've never been so week in my life from anything. It was almost 2 weeks before my legs were strong enough to hold me up again.  I  have  just finally gotten to the point I can go up and down the outside stairs to the house.  It's been a pretty rough last 2 months between the COPD and having covid for 3 weeks.
Read more
June 28, 2022
6-28-2022                                               https://leebell.net  I am so tired of having to take a stupid amount of pills every morning.. Depending on the day it can be as many as 12 every morning.  A few months ago I was taking 1 pill!   Ok, that was just my rant for the day.
Read more
June 14, 2021 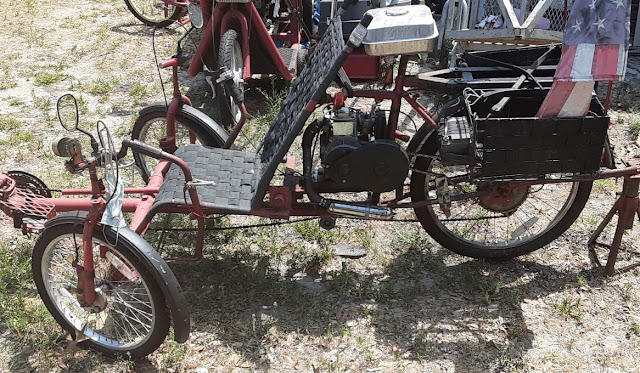 https:// WWW.leebell.net     Main menu  I've been doing a bit of modification on my 15 year old home made personal recumbent trike again. This was one of the first trikes I originally built. Since then I've built and sold many of them locally to people.   The rear hub motor was removed and a 49cc 4stroke engine was added to replace it.  This motor has a built in jackshaft so that made things a bit simpler when installing it.    The trike has about the same top speed ( 30 mph) but now I have a lot more range with it again.  The little gas tank holds about 2 quarts or so and that gives me about 40 miles of range.  It will get me all the way across town and back before I need to add more gas.  I also use straight gasoline in it - no gasahol !  That stuff ruins small engines.  This is the third gas engine that has been mounted on it in the last 15 years. It's also had 4 different electric motor setups used on it.  It's basically
Read more